Continuing the story of my super long weekend, after Gili Trawangan, we went to Lombok to spend the rest of the holiday there. We've booked two rooms at White Rose Guest House at Senggigi area. Note that Senggigi area is long, way longer than Kuta, Bali. So we thought that if we booked rooms around Senggigi area, it would be closer to anywhere. Wrong. Senggigi itself is not the center of the island. It was the most crowded for tourism area, but it only starts from the evening to dawn. So in the afternoon, it would be nothing in Senggigi aside from small merchant shops and cheap restaurants.

My other message is be wise booking a room in Lombok. To save time and transportation money, it would be easier if you stay not to far from the place you want to go. For example if you want to go to Tanjung Aan area, you'd better stay at Kuta Beach Lombok, from Kuta beach you can go to Desa Sade, Mawun Beach, Tanjung Aan, Bukit Merese, and Selong Belanak Beach. If you want to go to Gili Trawangan the next day, you should stay at Senggigi, but in the middle of Senggigi near to Bangsal Harbor. Point is, do your research if you have limited time.

Back to our story. After we ride the boat from Gili Trawangan harbor, we arrived at Bangsal, and picked up by the driver from our Guest House, Mas Yoga. We got no expectation of the guest house, since you know, guest house is just guest house. So we got there, and was welcomed by Uncle Bob, the most friendly Guest House' owner ever! He said "We got a strong wifi, strong water pressure, hot water, and open kitchen 24 hours, where you can take anything from the fridge. It was part of the deal". He said that his wife (Tante Stephanie) was out and while waiting, we can rest in our rooms first. This is where the story begins. We booked for motorbike before, but seeing the road condition and the length of the places we wanted to go, it seems impossible. So we decided to rent a car, an automatic car. My bad, I didn't confirm to Tante Steph that we want to rent a car. So she didn't confirm the car, and we got no car to rent. Plus, it was the long weekend, so it was sort of busy and hectic for car rents, and since we're on a budget we didn't want to use the driver since it was an extra cost.

Hungry and tired, we cannot seems to think. So we decided to rent the bikes only for the rest of the day, and figuring something after we eat. So we go around Senggigi area and stopped by a dusty and hot restaurant to eat. The food is blah, but since we're hungry, it's better than nothing! Then we ride to see the famous Senggigi beach. I don't even take pictures in Senggigi beach. Why? It was filthy and crowded. And please don't let me start about how they look at us four haha. To cover our dissapointment, we went to Malimbu Point, which is also crowded and not that pretty either. So we decided to go down and search for a quieter place, which we found on our way back to guest house (pictures below).

Then we back at the hotel and meet Tante Steph, she said Mas Yoga knew someone who knew someone to rent the car plus the driver. After negotiating then we agreed to rent a car for the next day only, because we want to go far. A deal's a deal tomorrow we'll be picked up at 8. But for now, let's search for dinner. Tante Steph said, there is a good Ayam Taliwang at Mataram, and we totally should try it. She kindly called her coworker, Mbak Yanti and Mas Agus, to escort us to eat. Then we went on a convoy using motorbikes to Mataram. Thank you Mbak Yanti and Mas Agus, you guys even waited for us while we eat.


The first day at Lombok was closed. Ratih didn't even wash or shower, she just went straight into bed without changing clothes! Eww grossssssss. But acceptable since the night before we went partying until the dawn. And she made us laugh by doing this the night before.

We've picked up after breakfast by the driver, guess who's the name! Pak Ariel. lol "Kalian luar biasa" haha. He was talkative and kind. Ratih the one who gets most sleep at the night, talking endlessly with Pak Ariel about Rinjani, and the other things I don't catch up. While the three of us were sleeping on the back.

For the first stop, we've visited Desa Sade. The famous village for Sasak People, who mainly weave for their living. But since Desa Sade is now tourist attraction, their main living is from our donations. They spread the donations and income from fabric selling equally between them. Desa Sade is small and intimate. The guide says they can only marry their cousin. So basically, they are all connected in one blood. And if they want to get married, the man needs to kidnap the woman from her family. And man, it's a challenge, since their maiden was usually put in the highest room of their house (dalem bale). If the kidnapping was a success, they got married and the woman will stay on the man's house. But if the parents of the woman catch the kidnappers, he needs to pay fine. And the marriage age is quiet young. The girl I bought a fabric from is only 18, and she already got one child.


After Cultural sightseeing, let's go to the beach! Let's make our dark skins darker! For the first stop, Kuta Beach (not to be confused with Kuta Beach Bali). Most of the beach in Lombok got this characteristic, the beach was located in the middle of the hills. Kuta beach as well. And funny thing in Kuta beach, in the afternoon there are no foreigner at all, in the afternoon, there are only locals. Kuta Beach Lombok was not as magnificent as Kuta Beach Bali. The sand is like pepper, big and grainy.

Then we proceed to Mawun Beach. SO. MUCH. BETTER. THAN. KUTA. I love the sands, but the waves are too strong, I even falling down because of the waves. lol. Playing time!


Next place is the most instagramable place in Lombok. If you search for Lombok, this place always showed up and looks very pretty. So we go there to prove whether it was really beautiful or those people are just good on editing pictures, Tanjung Aan and Merese Hill (Bukit Merisik). Search for those places on instagram! Pretty right?


Well, Tanjung Aan is just another beach. Not pretty nor ugly. Maybe because the sea is receded so the trash are coming up to the surface. Leave Tanjung Aan alone, let's go to Bukit Merese!


As always, funny things always happened. This time, before the sunset comes out the rain comes pouring down at Merese Hill. So we came down, right after we set foot on the ground the rain stops. Well... That went well. So Ratih and Corry decided to stay at Tanjung Aan and enjoying Lombok Coffee, while me and Mitha trekking back to Merese Hill. And that long trek doesn't disappoint. We got to see the sunset. Magnificent sunset!

After a long day. We decided to try Sate Rembige. The famous food of Lombok. Looks tasty and nice and all. Until I take a bite then decided not to eat it. It was spicy as hell. Not your usual spicy but really burning your throat and stomach. Too bad I didn't take the pictures. But today is done and closed by ramen cup at the guest house.

This day we don't have car nor plan, we rent motorcycle from Tante Steph and asked where should we go. We heard about Narmada Garden before from Pak Ariel, so we decided to go there since it was located on West Lombok, so it shouldn't be too far. Tante Steph and Mbak Yanti decided to come and join our trip. So girls day out! We rode to Narmada Garden and there we drink, wash our face and hand using the holy water. Enteng rejeki, awet muda, enteng jodoh katanya. It was superstitious and I don't believe anything that can't be explained by science, but we love to try new things! And the water was cool and nice especially after a long ride from Senggigi (yeap, this place too was far).


After Narmada, we bought souvenirs for friends and family, then back to guest house. Tante Steph was so kind that she wants to lend us her private bathroom, and let us take a rest in her house (the guest house was one complex with her private home), she even let us drink and eat anything that on the kitchen. Thank you Tante Steph and Uncle Bob for letting us stayed for a couple of days on White Rose! I can't wait to get back to White Rose again. Lombok itself was not as we expected to be, and we prefer Gili Trawangan than Lombok, but thanks to nice Tante and Uncle, and of course the rest of the staffs, we met a new family there. Instead of pictures and expanded list of places that we've visited, we brought back stories about new family back to Jakarta.

So there's all our story from Gili Trawangan and Lombok. Hope to see you all on the next post of TRAVELING! We might looks tanned and ugly now compare to before we swim, and ride, but we feel happy and recharged!

Note: All the pictures were raw and unedited. No special reason, just lazy :D 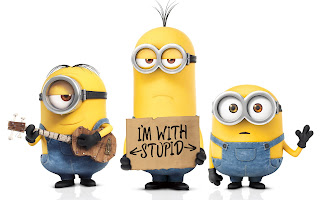 Triangle Objects = Illuminati? Rants About This One Blog Who Blogged About Minions (2015)

Story of Ahab and St. Savin (from The Devil and Miss Prym)